Kari Malmstedt is a man with a relaxed and unpretentious attitude. Transport company Kari Malmstedt Oy's turnover consists mainly of timber transport, operating throughout Eastern Finland from Nurmes to Hamina and as far west as Petäjävesi. Managing a large plot of land teaches you to appreciate the basics such as reliability, availability and dependability. That's why Malmstedt has chosen Kesla.

“They work well,” says the entrepreneur from Enonkoski in his relaxed, straightforward style. A smile at the corners of his mouth completes the message

Malmstedt is certainly not running any small-time business. His company currently employs around 45 people – including the entrepreneur himself – most of whom work as operators of 20 timber trucks. The company's arsenal also includes one 92-tonne HCT test truck, more than 20 timber cranes, as well as cassette trucks and wheel loaders for earthmoving.

“We have a pretty comprehensive fleet,” says Malmstedt.

No regrets for having chosen Finnish Kesla

When it came to timber cranes, Kari Malmstedt Oy chose Kesla in 2005 and has never regretted the choice.

When asked what prompted the switch from the Loglift and Jonsered products he had previously used, Malmstedt doesn't have to think about his answer:

“Finnish-ness”. And Kesla is not just a Finnish, but a neighbour of Malmstedt. “Kesla is a local player, right in the middle of our driving area. Spare parts are readily available and after-sales service is better than that of the competitors, it has to be said," Malmstedt says.

Malmstedt praises Kesla's own after-sales service and sales organisation, which has been able to take the customer into account in an exemplary manner, for example in warranty matters. Erätaito Tero Toivanen, Kesla's official contract maintenance company, gets full marks from Malmstedt for being active, even to the extent that “the salesman was a big selection criterion for us.

” The Keslas used by Kuljetusliike Kari Malmstedt Oy are front-fold Z-cranes. "In a tractor, the load can be maximised if the crane doesn’t take up load space," Malmstedt says, and continues: “Kesla is completely superior to its competitors in this respect. The same applies to lifting power and reach.” Malmstedt also praises Kesla's hydraulics: “We’ve got it right, even though our machines have an old-fashioned dual-circuit hydraulic system. The mechanical four-lever steering works well. The operating links are on top of the block. It does not require any intermediate levers and is sensitive to use. We have not seen a need for electric steering.”

No need to strip off in the summer heat

Malmstedt's Kesla crane cabins are the basic model, but customised with the company's own colours, of course.

“There are now eight Kesla's with the new model of cabin. They were switched to in 2017,” says Malmstedt, describing Kesla's standard-size cabin as comfortable. “Good visibility, and even larger men can be accommodated. The operators have been very happy.”

Forestry workers in Finland inevitably encounter the country's extreme temperature fluctuations and seasonal extremes. So do the people who drive timber and operate cranes. In the freezing cold, Kesla's cabin is warm enough, and even in the summer heat you don't need to strip off. However, not all the Kesla cabins in Malmstedt's company are equipped with air conditioning, so they need to have “a few more opening windows,” according to the entrepreneur But the Malmstedt company as a whole has been satisfied.

“Kesla is reliable and durable. All our cranes are the same and can be used on all vehicles.” So they work well. That's the secret behind the happy smile of both Kesla and the owner of the transport company. 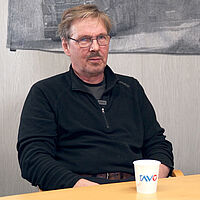