Itämoto Oy has been in operation since 2014, with its headquarters in Tolosenmäki, Kitee. The company’s equipment includes two John Deere harvesters, one built on excavator as a base machine and one Sampo Rosenlew forwarder. The company performs contract work for Stora Enso through Tähtimetsä in the Kitee, Tohmajärvi and Rääkkylä areas.

The entrepreneurs have a long tradition in forest contracting

Both entrepreneur brothers, Veini and Rauno Matikainen, are experienced in forest contracting.

- In the early 1980s, I drove a forwarder for a living. I became familiar with harvesters in the 1990s, when my brother and I were partners in a company called Konekorpi, and the company acquired its first harvester, says Rauno Matikainen, one of the brothers.

Veino and Rauno founded Itämoto in 2014, when the Konekorpi operations were divided between two separate companies. The company has had plenty of work, and it employs three people in addition to the brothers.

Two harvesters, one excavator and one forwarder

- Our own forwarder follows one harvester, and contractors manage the forwarders behind two other harvesters, says Rauno Matikainen.

Itämoto’s contract sites are located in Central Karelia, i.e. the Kitee, Tohmajärvi and Rääkkylä areas. The distance to the furthest away contract sites is 60 km. The company has a trailer for transporting the equipment, so it can handle its own transport. The contracts vary in size: the smallest contracts last a few hours, while the longest last several weeks.

The excavator is especially well-suited for swamp contracts

Itämoto’s first excavator was New Holland, with an installed KESLA 20RH head. The current excavator is Doosan 140, with a KESLA 20RH-II-head with an xTender. The combination was procured in 2016.

- KESLA was a natural choice for a head. I was familiar with it already from the first harvesters that I drove. Naturally, the nearby location of the factory approx. 70 km away also made the selection easier, says Matikainen, and adds that Kesla heads have proven to be very durable and reliable in use.

The excavator’s measuring system is KESLA Xlogger. Matikainen praises the measuring device, calling it advanced. He especially compliments the hand’s adjustment possibilities, as well as the clear and simple use.

Matikainen considers the Xtender a necessity in an excavator harvester. It can be used, for example, to cross ditches. The Xtender also gives more reach. Matikainen thinks excavators have many advantages.

- Many forest owners favour excavators, because they are more gentle on the forest floor. Even though the excavator is not as agile as an actual harvester, with Xtender it can cross difficult terrain, says Matikainen.

Harvesters and excavators are roughly equally productive, according to Matikainen. Itämoto uses the excavator especially for forest contract work in swamps. These kinds of contracts are also usually larger: the same contract can last several weeks.

The excavator also gives Itämoto more contract opportunities. After the timber harvesting season has ended, the excavator is prepared for excavation work and used for soil cultivation, especially scarification in gaps. 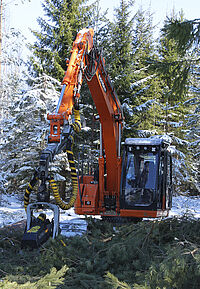